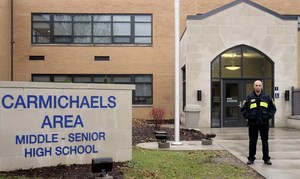 CARMICHAELS – Craig Miller is a busy man. Last year, he resigned as the Cumberland Township police chief, but he has taken on two full-time positions – one as a night-shift K-9 unit officer with the township and one as the new Carmichaels school resource officer.

CARMICHAELS – Craig Miller is a busy man. Last year, he resigned as the Cumberland Township police chief, but he has taken on two full-time positions – one as a night-shift K-9 unit officer with the township and one as the new Carmichaels school resource officer.

Miller, 37, said he made the switch because he has two elementary-age children in the Carmichaels district.

“When the opportunity presented itself, it’s always nice to be with your kids,” he said. “It’s one of the major reasons I took the job.”

Gyurke started in the position after the Columbine High School shooting that killed 12 students and one teacher in Colorado in 1999.

“I was the first of my kind in this area because none of the other districts had an officer,” Gyurke said. “It started out more as like a security guard position but through the years it’s really evolved into a full-fledged police job.”

Gyurke said he’s enjoyed his time at the school.

“It’s been a great run. I got to be with the kids and watch them grow up from kindergarten to graduation,” he said. “I feel like I’m handing it over into very capable hands.”

Menhart said the 12-month position will include some additional duties over the summer and that Miller’s salary with the district will be $50,000.

“Craig is really instrumental, and has been for a while, in our policies while working as chief of police in the township. He’s done an awful lot for the school,” Menhart said. “It turned into a perfect fit. He has kids in the district.”

Miller said he gets out of the office more as a school resource officer, since his position as chief was “more administrative.” “Hopefully, I left the department a better place than when I went in,” he said. “I was lucky to have a lot of good officers working for me to make my job easier.”

The new chief is James Vogel, who recently retired after 23 years with Pittsburgh police. Miller said Vogel has been doing great in the position so far and “hasn’t missed a beat.”

Miller said he wanted to remain with the department at night to spend time with the township’s K-9 officer, Artis, who is more than 10 years old and expected to retire soon.

“I wanted to get back on the road with Artis,” Miller said. “I would hope that the dog will be replaced at some point, because he’s a valuable asset.”